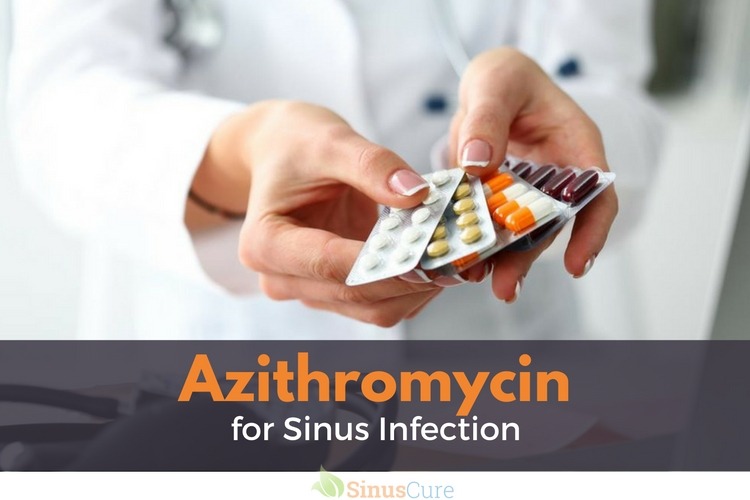 Generally, Acute sinusitis lasts less than 6-8 weeks or occurs no more than 2-3 times per year, with each episode lasting no longer than 12 days.

However, chronic sinusitis lasts longer than 2 months or occurs more than 4 to 5 times per year, with symptoms typically lasting more than 18 to 20 days. The major cause of sinusitis is allergens, viruses, pollutants, fungi, viruses and  bacteria.

The main objective of treatment is the elimination of bacteria from the sinus cavities using antibiotics. This helps in preventing complications, reducing the risk of chronic sinusitis and relieving symptoms.

The inflammation seen in the sinuses is most often due to Staphylococcus aureus, though Pseudomonas aeroginosa is also a recognised cause.

Azithromycin is a commonly prescribed medication in the treatment of acute bacterial infections of the sinus. Here we take a look at this drug in a little more detail.

Azithromycin falls under the class of macrolide﻿-type antibiotics that are used in the treatment of various bacterial infections.

This medicine works by stopping the bacteria causing the infection from multiplying.

How Does It Treat Sinus Infections?

Azithromycin possesses a ‘bacteriostatic’ activity. This means that it halts the growth of bacteria and does so by blocking the formation of proteins within the bacterial cell wall. This in turn reduces bacterial proliferation and treats sinus infections.

What Is the Prescribed Dosage? One study has shown that taking 2 g of azithromycin (extended-release) may be more effective than a longer course of amoxicillin.

However, clinical studies have also shown that azithromycin may not be the best choice of medicine in managing sinus infections as the improvement in symptoms is not because of the effect it has on the bacteria but is actually due to the inflammation fighting properties that it possesses.

Furthermore, azithromycin is not very effective against organisms such as Streptococcus pneumonia and Hemophilus influenza (other causes of sinusitis).

What Are the Side-Effects?

Side-effects are not very common but some people may experience indigestion like symptoms, loose stools, nausea and vomiting.

Serious side-effects are also very rare and may include blurring of vision, reduced hearing, difficulty speaking and swallowing and occasionally problems with the liver. If you encounter any of these symptoms, please make sure you inform your physician straightaway.

Allergic responses to antibiotics are a known phenomenon and azithromycin is no exception. If an allergic response develops, seek medical attention immediately.

Tips to use Azithromycin Azithromycin is a macrolide-type antibiotic that is useful in the management of sinus infections. Side-effect profile is minimal though the choice of prescribing this must be made carefully.

1 thought on “Azithromycin for Sinus Infections”